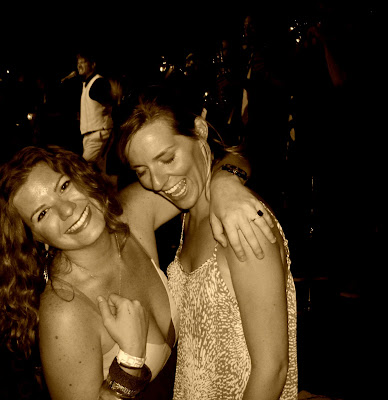 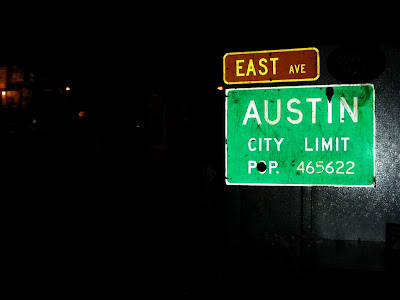 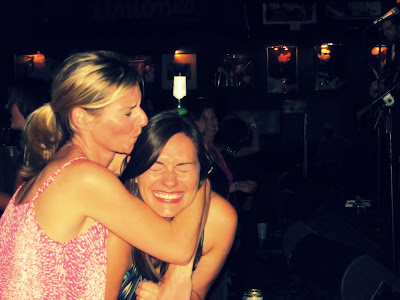 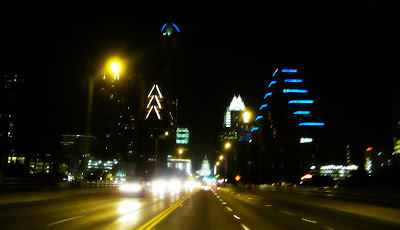 Our latest weekend jaunt was to Austin, TX. And welp, we think everyone should visit this city. With a City slogan of "Keep Austin Weird," it must be rather radical. Our friend Missy just moved there a couple months ago and was dying for friends to come on down.... flights were cheap, so we booked.

Brooke arrived around lunch time on Friday. She and Missy headed to the W spa http://www.starwoodhotels.com/whotels/property/overview/index.html?propertyID=3224 for mani/ pedi/ mimosas. After being primped, they spent several hours by the awesome rooftop pool. I was set to arrive around 6, but due to delays in Dallas, I arrive around 7pm. I knew Austin was going to be an easy city to fall in love with with I saw the baggage claim area. The luggage belts are lined with oversizes colorful pieces of art... Guitars of course. I always knew Austin was known for live music, however I was unaware it was the "Live Music Capital of the World"!

As I stood curbside outside Austin - Bergstrom trying to forget about my hangover and get excited about what the weekend holds, I waited for Brooke and Missy to come scoop me. Minutes after I walked out into the smoldering heat they arrived: thundering through the pickup lane with Adele's "Rolling in Deep" blasting (rather perfect song choice, in fact it became the theme song for the weekend) !!! The hangover melted away and joy instantly fills my body.

The weekend included the following:

Dirty Bill: The dive bar of dive bars. One of our favorite bars we went in for a drink.

KungFu Bar: Where we HAD to have a pickle juice vodka shot, as Missy told us it was an Austin Staple... we later found out it has nothing to do with Austin and it came from NY.

Taverna: We popped in here for lunch on Saturday, to our surprise with any entrée you got $1.00 Mimosas!! Great brunch selections and amazing pizza. /

Barton Springs: After a full belly and slight buzz from Taverna we cruise on over to Barton Springs. Mister Cheek a well traveled dear friend to us both, suggested to beat the heat, we should check out the cool (literally and figuratively) Natural Springs. We also try to include at least one educational activity with each trip. Missy had not yet been either, so all of us were a little unsure on what to expect. Apparently everyone in Austin had the same idea. After parking and walking to the entrance we found about 100 other people waiting to get in to cool off as well! With an admission price of only $3.00 for as long as you would like to stay, no wonder there was a line. We spent several hours here basking in the sun, swimming in chilly water, jumping off the diving board (ok, only Missy did that part) and of course people watching. We were watching a set group of people in particular, that we just happened to run into later that night... and we had mutual friends. Small world. Run ins like this only confirm for us that traveling is the best way to make new friends.

Second:  What a little gem of Austin. This place was so wonderful. We had a cocktail then several different glasses of vino. Our waiter was on point and very knowledgeable. He even introduced us to our now new obsession, keg wine (way to go green!)

Our amazing host, Missy, picked up some tickets for Matt & Kim for Saturday night. After all  we couldn't come to the live music capital of the world and not see an awesome live show! We had a blast at this great outdoor venue right in the heart of downtown Austin. We had big plans to attend the gospel brunch at Stubbs on Sunday morning, but ended up checking out Gueros for some amazing Mexican, instead. 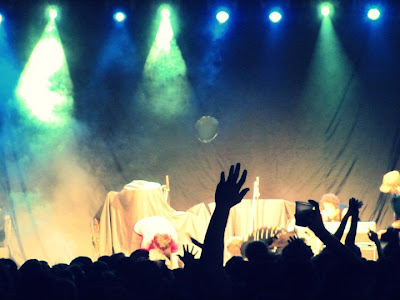 Both nights of bar hopping in Austin brought us to Missy's favorite part of town, Rainey Street. This area only recently became a hub for awesome bars and restaurants, and is a few blocks away from the hustle and bustle of 6th Street. All of these bars have amazing outdoor spaces and a laid back vibe that is a nice contrast to some of the more busy/ touristy parts of downtown.

Lastly, a few tips for other Austin-goers. Take advantage of the many rickshaws you see around town. It's a fast way to get from bar to bar and during the summers in Austin, it's nice to feel that rickshaw breeze in your face as you check out the different parts of town.

﻿﻿
﻿﻿Finally, if you're out til the bars close, you may need a late night bite. Food trucks provide lots of options, but our favorite was Turf and Surf. We were craving their burger all weekend after sampling the fare on Friday night...

We can't wait to get back to Austin and explore more of this great city! http://www.aclfestival.com/
﻿﻿﻿