October 16, 2012
Looking for mountain wedding perfection? Linville, NC should be on the top of your list. Emily & Will, wonderful people and friends of ours were recently married here. I'd been to surrounding areas, Boone & Blowing Rock, but never spent anytime in Linville. From Em & Will's description  I knew to expect beauty but not much else. I was more than pleasantly surprised.

Email threads of where to stay, what to eat and things to do started months before the big day. After expansive world wide web searches, what seems like hundreds of emails, and a final # a house was booked. The house I was in was appropriately called the Nut House. If one is ever in need of a simple mountain cabin for the allowed 6 (or the actual 10-13 or so we had), this without doubt is your place. It was everything we needed and wanted (minus a few beds). The view was wonderful (from the front porch).  We had zero neighbors (one mostly vacant trailer) to complain about our late night: dance parties, debates and cook offs.  We even had stray dogs that kept us company throughout the weekend. They were affectionately named Tux- short for tuxedo  Brad- as in Brad Pitt (he was the most handsome one) and ________ #3 will come to me- maybe. So, really, what more could you ask for?! 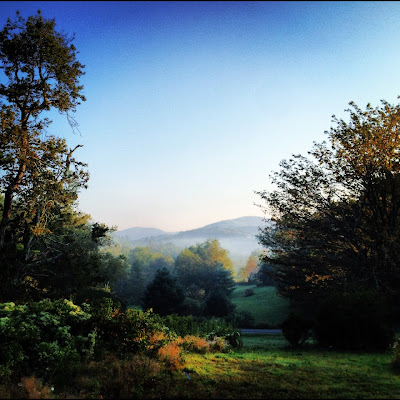 Do not listen to people who say there is cell service. It's spotty- at best. This is good to know, if you are arriving after a beautiful sunset drive in, like me. Trying to find a house, with no real address proved capable but challenging. I at least was familiar with the area, in comparison to those who flew from all over the country. I'm not sure if they knew what they were getting into. After two attempts at the "go past the hospital, take a left on a small sloped road and go to stop sign. Look for the post office, which you may or may not see b/c it will be pitch black, take a left then your first right onto a dirt road. Go up the hill and look for a fork, take that, then the house is up on the hill", directions, I found it.  I arrived on Thursday, which was less stressful than rushing in after work on Friday. After unloading and counting the couch/ bed ratio in my mind to the # of people on our emails, I made a drink and headed "to town" to find everyone. This is when clear cell reception is helpful. I finally just went to the lodge front desk and asked where the Wooten's were staying and asked for their house number. I went back to my one spot with a little bit of service-  parking lot in a sketchy hotel parking lot to call the Wooten's. Mr. & Mrs. Wooten's greeted me with open arms and then escorted me down the road to where the "young people were hanging out". I arrive at the Bostic's abode to find the likes of snacks and lots of drinks. In deed, the youngsters were gathered here. We stayed gathered until almost midnight then navigated back to the Nut House. After a couple hours of tunes, we turned in. The leather couch was just perfect for me.

I was thrilled with the company I was keeping. All new faces. But any friend of Emily & Will's was sure to be worthy of a weekend cabin stay.  Friday, we had the entire day to take in the NC Mountains. The girls- Molly, Julie and I set off to find some trails while the boys did their thing. We attempted Grandfather Mountain, however we were not pleased with the $18 per person entry fee. Plus there was plenty of other trails that were free. Instead I drove them by so they could see it from afar! From here we rolled the windows down and took in the crisp fresh area as we winded around the mountains until we came to Linville Falls. 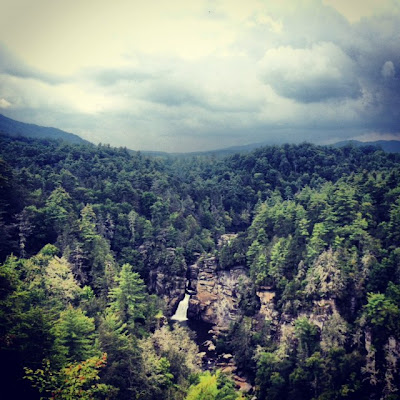 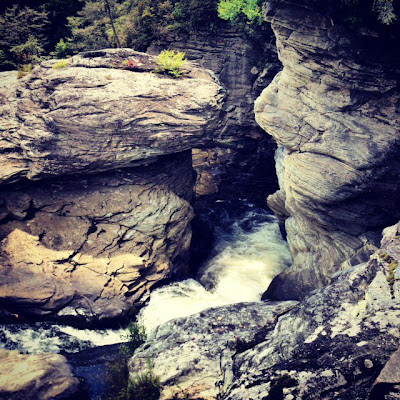 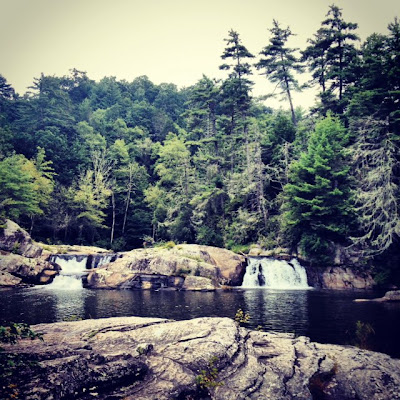 After hiking a couple hours and seeing that a storm was rolling in we set off to find Old Hampton General Store. Emily told us this is where our lunch should be had. So following directions, we went. We stocked up with BBQ and Pimento Cheese and headed to the local food store to get supplies for the weekend- as we knew the boys would not think to do it. Now, we were really stocked up: snacks, good yum yum, mixers, beer, liquor, cups, ice. After devouring the delicious home made treats, we crank the tunes and get ready for the reh party. The rehersal dinner was for family and wedding party, so we gathered with a few others at the Eseeola Lodge Club House for apps and cocktails before walking over to the party. The rehearsal party was in the club house by the pool. They had really good finger foods, wine, beer and a local blue grass band! Our friend Jeff Cheek was set to arrive almost when party was over, since he was picking up a new friend, Alex in Charlotte.  From here, we house hopped before taking the late late night back to our house. Once again, jams were cranked and dance parties commenced. Only difference in Friday night was we had a few more house guest :) Back to those directions:  Good directions are very important- especially when passing them along. I gave these directions to Jeff  and for some reason he drove around for 1.5 hours looking for it. Minor detail on my end: forgot a tiny left he was supposed to take. Thank goodness everyone knew where the lodge was. It quickly became a go to meeting spot. 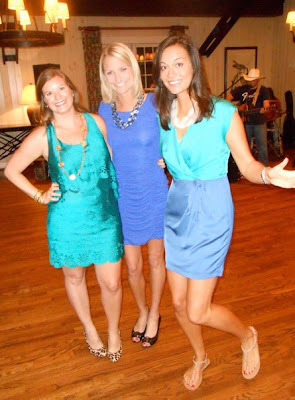 Not sure what the time was, but we are going to call it really late/ very early, someone made an executive decision to call it quits. I started on the blow up bed, that never actually got inflated all the way and ended up sharing a bed with a friend nestled against a wall b/c said friend was sprawled out and way to big for the bed (we are talking most of the leg hanging off the end) Not sure which sleeping combination was less comfortable. None the less a little sleep was had and I was ready to start the day. Friday night, Brooke & Douglas informed me there was ample room at the house they were staying at in GMGCC and I was welcome to stay there, should I need to. The time had come where I needed too. I pack up my stuff that is scattered about the Nut House and head over to the new house. It was the perfect day to get married, sunny with a slight breeze. After a little nap we all got ready and set off to find the church. No wedding weekend jaunt is complete without some minor panics. Ours took place while trying to find the church. 3 church parking lots later we found it. Thank goodness for Jeff Cheek who answered his phone and gave us directions to Crossnore Presbyterian Church. This church is one of the most beautiful places of worship I've been too in North Carolina. It was built in 1914. Read here for more history on it!

From the church we play follow the leader to the Eseeola Lodge's Pavilion . Rustic, cozy, warm and beautiful is what this reception site was, complete with a real wood burning fire.  We all could not stop oohh and ahhhing. It was just breathtaking.


The reception was great, we danced the night away and the photographer captured it all! Again, late late night was at the Nut House. The Nut House was the "DC Crew" and then some. The DC Crew were friends of Emily and Will's when they lived in DC. These people know how to have a good time. I was thrilled I was considered fun enough to join them.

Two new friends Alex and Richard needed to catch a flight from Charlotte back to Boston and New Jersey, I was heading back East, so I offered some Southern hospitality and gave them a ride. The only conditions: 1. Someone other than me drive 2. Windows must be down. They obliged and Alex drove. I can't complain to much, as I was the one who didn't want to drive, but Alex was clearly not experienced in the mountain hyws. I just gripped my "Oh Shit" handle and played DJ and kept my mouth shut. As soon as we hit a real highway the discussion on where to eat lunch began. Clearly I was taking them to Cracker Barrel. As we pull, I have an 'Oh Crap' moment... It's Sunday at 12:30- this means the church crowd. We didn't have time for the 30 min wait so take-out it was. Fried chicken, green beans, fried okra, hashbrown casserole, mashed potatoes and gravy and biscuits is what we have them to-go box up. We sat out front in the rocking chairs with Reba blaring and took it all in. All. Of. It. With hangovers slightly less bad now, we truck on to the airport. Good-byes and hugs were given then the boys were off.

Overall such a splendid weekend full of joy, love, celebrations and new friends!

Other things to check out in the area:

February 12, 2018
Pura Vida! Please note these pictures were all taken from friends, as my camera was stolen while in Costa Rica.

February 19, 2019
Over the past couple of years Scandinavia has been on my mind. This area of the globe is known to be the some most expensive parts of our world. When I would doubt the trip, I would remind myself "you can't take the money with you" and pretty much just said F it and booked it 3 months out. One of my best gals, Allie, decided to come along! We spent 13 days exploring, spending money we didn't really have, laughing,learning, navigating and negotiating the unknown, oohing and ahhhhhhhhing, riding bikes, walking + hiking miles upon miles, eating, shopping and being extremely thankful for the most wonderful weather.

Allie and I are like sisters, we bicker then hug (or sometimes cry) and move right along. Our traveling styles are very different but that is what makes a trip like this fun. We learned alot about one another and ourselves. We took time / space when we needed it and we pushed each other out of our comfort zones.  It was because of these things we grew in ours…
1 comment
Read more

January 17, 2012
Atlanta :
- Is one of only two cities in the world to be home to not one but two Nobel Peace Prize winners. Martin Luther King, Jr was presented the award in 1964 at the age of 35. President Jimmy Carter, in 2002, making him the third U.S. President to receive this honor. Both Nobel Peace Prizes are displayed for your viewing pleasure in Atlanta. http://www.nps.gov/malu/index.htm and http://www.jimmycarterlibrary.gov/ - Has the largest single mass of exposed granite in the world, at Stone Mountain. - Has the tallest hotel in the Western Hemisphere, Winston Peachtree. It's 73 stories and 723 feet tall. - Has the14th largest mall in the Nation, The mall of Georgia. - Has 41 public golf courses. - Houses the second  largest theatre organ in the Unites States of America and it's at the renowned Fox Theatre. - Has an area called Buckhead and owes its unusual name to the 19th Century local general store owner Henry Irby. He killed a large deer and prominently mounted the buck over …
1 comment
Read more